You are here: Home / Do you have an Indigenous climate action story to share? / 2019 / March

On March 28, 2019, a webinar on Eco-Cultural Approaches to Climate Change Adaptation was presented by the Tsleil-Waututh Nation (people of the Inlet). This webinar provides an introduction to the TWN Climate Change program, youth stories, and community climate resiliency planning.

We have received permission to share the recorded webinar on this website as it may contain valuable information and insights for other First Nations communities working on climate change projects in Canada.

(Note: You may be prompted to download Adobe Connect to watch the video – a link to the download will appear automatically). 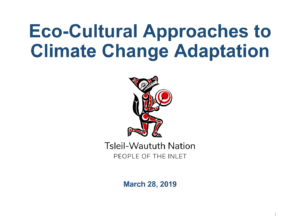 Globally, we have been discussing the effects of a changing climate for quite some time.  However, it has been only recently that these discussions have widely acknowledged the urgency of this change- an urgency that acutely reflects the experiences of many First Nations communities.  This acknowledgement is represented by the very words we use to talk about our planet’s climatic situation.

Following the Paris Agreement discussions of 2015, many have adopted the term “climate crisis”, when referring to the extreme shifts in our global climate.  Terms previously used for these shifts included “climate change” and “global warming”.  This progression in terminology reflects our evolving understanding of the environmental situation our planet has ben put in.  Interestingly, it also shows a transformation in our understanding of how people respond to the situation, depending on the labels we use to talk about it.

Through to the mid-2000s, “global warming” was the term widely used when referring to our changing climate.  Slowly though, many began to realize that the term “global warming” not only falsely represented the true complexity of the issue we were creating, but that a slightly warmer planet even sounded appealing to some.  And so came our use of the term “climate change”.

While “climate change” succeeded in acknowledging the complexity of this phenomenon, and is still the most accepted term used today, it has proven unable to captivate the majority of people into taking meaningful climate action.  It dampens the message of urgency that the world needs to hear, leading to the acceptance of these changes as a fact, rather than a fault.  Instead, we need words that instil meaningful action.  We need words that convey urgency.

For the first time, we have a label that now directly reflects the realities faced by many communities around the world, as the planet struggles to keep up with the lifestyles of many humans.  The “climate crisis”.  First Nations communities in Canada are among the many able to articulate this crisis experience.

In the past few years alone, the increase in extreme weather events, including forest fires, flooding, and higher annual temperatures have been notable.  Habitats and wildlife are being lost.  Lifestyles are being threatened.  First Nations communities are often the first to feel these changes, through effects including the loss of traditional means of gathering food, reduced access to winter roads, and the destruction of traditional revenue sources.

This coming week, leaders from various First Nations communities will be gathering in Ottawa for the 2019 Indigenous Climate Adaptation Gathering.  They will be discussing their current and future experiences with the climate crisis, some of which will be shared across communities, others of which will be unique.

Just as the statistical reports of scientists have shown us around the world, the lived experiences of First Nations communities prove that we can no longer passively hope that our planet will be okay.  Instead, we must act on creating meaningful change, and we must encourage the development of realistic adaptation plans for the communities most vulnerable to these changes.

When discussing action against climate change, we frequently hear the words “mitigation” and “adaptation” floating around.  While often used interchangeably, the terms indeed have distinct meanings and roles, in the process of preparing for a changing climate.  The main difference between mitigation and adaptation revolves around purpose, and timing of implementation.

However, climate change is by nature a global issue.  Actions taken in one part of the world inevitably impact all other parts of the world.  Thus, while mitigation is the goal, the undeniable forces nature require imminent attention.  This is where adaptation comes in.

Climate change adaptation seeks to prepare communities for existing and projected climate change, equipping them with the infrastructure and resources to stay safe.  When possible, adaptation also seeks to preserve as much as it can, whether it be built infrastructure, lifestyles, or economies.  Notably, adaptation goes beyond just coping.  As was noted by climate scientists in the PEI Climate Change Adaptation Recommendations Report, adaptation requires developing a “planned, informed, forward-looking, and thorough approach”.